Web Prolog and the Prolog Web

A collection of resources referenced during the talks

If you want to read something in connection with the talks, I would recommend Intro to Web Prolog for Erlangers for the second talk, and the chapter on SCXML and Web Prolog for the fourth talk. Also, the draft Web Prolog manual might be handy.

If you want to delve deeper, reading my manuscript Web Prolog and the programmable Prolog Web might also be useful. It’s very much a draft lacking some of the planned chapters, but should be readable enough for those who want to know more about the ideas behind Web Prolog. (I have a much later draft, which unfortuantely has become very messy and hard to read :-( . But if you insist, I might distribute that too.)

If you want to play with the language and perhaps take the tutorial (which I really recommend) you need to install the proof-of-concept implementation. See below. 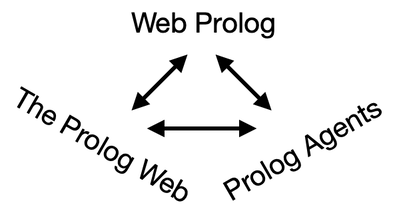 Note that this is a proof-of-concept demonstration/tutorial only. The system is not yet ready for online deployment. But you can install it locally, work through the tutorial, and play with lots of code examples. Here’s how to install it:

To be able to follow the talks, some acquaintance with Prolog would likely help. If you’re new to the language, you may want to have a look at an excellent new online book and a series of video lectures by Markus Triska.

You may also want to play with SWISH, which is a stable online IDE for Prolog, running 24/7 and having lots of users, especially among students taking CS courses involving logic programming and Prolog.

If you want to install SWI-Prolog locally, and check out the user forum, these are the links: